I'm not a fan of the singer, however this song is one of the top voice coach reaction videos. As I was watching one of those reaction videos, there was a blogger who took it to Google Translate, and it unfortunately got lost in translation.

Email ThisBlogThis!Share to TwitterShare to FacebookShare to Pinterest
Labels: translation

What I like about this song is that not only is it an OPM classic, but that it has a story to tell. That's why I'd like to share my English translation of the lyrics to the rest of the world.

Please note that the translation is not done word per word. Example bata is kids.

Email ThisBlogThis!Share to TwitterShare to FacebookShare to Pinterest
Labels: translation

Some of the #HeistClub authors launched their book 2 early this year. One of these authors is Yeyet Soriano. If you have already read her book The Retreat, then you would know what the plot of the stories for her sequel would be. I talked to Yeyet and asked her more about her sequel, The Crime Circle.


The stories started with #HeistClub's The Retreat, how did the idea for this came about?

I had to think about the plot and outcome of the stories already in order to write The Retreat and after that novella was done, I knew I owed it to the characters I created to explore each of the stories in more detail..the last part of The Retreat was the announcement of the future release of the 4 stories collection entitled The Crime Circle or TCC... so I knew my book 2 would be the 4 novella collection.


How long did you finish writing the stories?

It took me around 2 years to complete everything. I needed to do a lot of research, interviews and consultations because of the nature of the crimes. Plus I was not always "ready" to write continuously. Sometimes the stories became too dark that I had to take a break and do something "light" to recover. During the period I wrote other short stories in other genres--mostly romance. I needed to do those so I could go back to writing TCC and not go full dark!

What was the first story from the Crime Circle that you had first finished? Why is this so? Did you find it more relatable (as opposed to being easy, as well know)?

Believe it or not, I wrote a version of 3B4U back in the late 90s to early 2000s. I was the same age as the protagonists. Although I had to rewrite it completely to include in TCC, the bare bones of the story remained the same. The music of the '90s is very close to my heart and I've lived through the era's angst.

The story that really was the easiest to write with minimal rewrites is CLIMB. It was also the most fun as it was quite light compared to the others with a high heat level! It was also very relatable because I live in a gated subdivision and these kinds of heists happen all the time. I also see everything being shared on social media by the residents and by experience see the kinds of people we let in our homes--tutors, massage therapists, construction workers, plumbers, electricians, delivery guys, our maids, our family members' friends and acquaintances, etc. It was not too much of a stretch for me to concoct that story of an information broker. I also loved the thought of using the subdivision sari sari stores and convenience stores as settings for some key scenes. 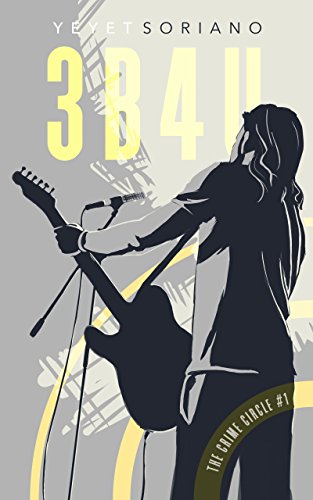 What about the last story?

The last story BREATHE was inspired by an idea from my nephew about a massacre survivor who was actually not as innocent as initially thought. He gave me the visual cue of an 11-year-old girl holding a pillow over her 4-year-old brother's face.  And it started there. The story is close to my heart because I wrote my late father into it as a key character.

Another interesting fact: most of the poems /songs used in the book, specifically for 3B4U and BREATHE, were written by me during my angst-filled youth. So you could say I felt those emotions, enough to write those words, so I could definitely empathize with the characters. Looking at them now (the poems) in the context of the stories, i am glad I survived through that time. Some of my characters didn't. But I hope I placed enough hope in the stories to at least alleviate the darkness.

This one you already know, but LOST was based on the experience of our common friend GMB. This was the hardest story to write not only because of the difficult topic but also because this
...as far from my own knowledge and experience as it could get. I needed to do tons of research, interviews and the like. It helped that GMB was very open about her experience and she even shared her journals so I can get insights into how she was  coping. I had a lawyer friend who helped me with the legalese including the laws, the way the courts worked, and the like. But it took meeting another woman with a similar experience, MF, for me to get this novel completed. She shared with me what happened to her and she even beta read the story. While for GMB the perpetrator was a neighbor, for MF it was her father. So it helped with writing Breathe as well. But it was MF's advocacy to help other victims and to not let her past define her that inspired me towards the ending of Lost. It also inspired me to help out the institution that she was advocating by donating a percentage of the profits to benefit young girls who went through similar circumstances.  So let's just say neeting these women and writimg these stories made me a better person as well.

Someone pointed out to me that my stories had one thing in common: Adults who failed their children by (1) putting unrealistic expectations on them, (2) inflicting physical, mental, emotional and psychological abuse, (3) withholding love and acceptance, and (4) not listening and believing.

It was not intentional on my part. So when he pointed it out, I was intrigued. He did say that for every adult who failed a child, there was another adult or surrogate parent who provided the needed support or love. As mentioned, not all the characters survive... but those who do survive did so because they had the necessary support system.

***The novellas are available on Amazon and Bookbed.