The Vain Game When Your Man Is Prettier Than You

When Your Man Is Prettier Than You

Today, this seems to be a question uttered not only by women but even by men—men who are not necessarily gay, but are by all means straight.

Meet the metrosexuals-- men who pay more attention on their appearance. They are particular with their looks, be it the number of facial creams they use or the hair removal products that they have tried. Metrosexuals pamper themselves and shell out money, not only on cars and gadgets but also on their beauty products.

The downside: Metrosexuals are picky, even with little stuff such as their cologne and even—gasp—your lipstick color. Sometimes you find yourself trying to measure up to his appearance.

The upside: His being looks-conscious means he has a lot to offer, like being well-groomed and well-spoken. You can proudly show off your guy to either your friends or your ‘rents and not worry about what they would say about his appearance.

The downside: His prep time is longer than yours. You don’t know if it’s the number of hair products he uses or the number of times he changes clothes -- you still have to wait for him as you both get ready for the movies.

The upside: Salon bonding time. More men now prefer going to the salon rather than their trusty barber. Maybe it is because of services like hair spa, manicure, and foot spa, or maybe because they get to spend time with you.

The downside: Gay guys hit on him. Face it, not only is your guy good-looking, he also dresses well, attracting a lot of women and gays. Because of this you’ve already thrown more than dagger eyes to a lot of gay men for mistaking him to be a homo.

The upside: He is fashionably aware. This does not necessarily mean he knows the trends—if he does then he might just be with the gay guys flirting with him. Because of this, he can give you advice on what looks good on you!.

by ANA KRISTINE B. VALENZUELA

WITH box office movies, hit prime time teleseryes, and a successful recording career under her belt, plus endorsements, and accolades actors her age—and even some actors twice her age—could only dream of, you’d think that Bea Alonzo would be slacking off by now.

To her credit, Bea, whose real name is Phylbert Angellie Ranollo, really shows her growth as an actress with her every project and she persists on honing her craft.

This is why she sees no negative effects with ABS-CBN’s management’s decision to separate her from John Lloyd Cruz, her on-screen partner in a number of blockbuster movies such as Close to You and One More Chance, and top-rating television shows such as Kay Tagal Kang Hinintay and Maging Sino Ka Man. Bea actually considers it as a big career move.

“I trust the ABS-CBN management. When John Lloyd and I took a break from the love team, it did well for both of us,” she adds.

According to Bea, it helped that she gets offered good projects and that she has supportive fans. “Swerte ako na nabibigyan ako ng right material, ‘yung mga magagandang material, and of course, sobrang overwhelming din ‘yung support ng fans who have been there since Day One,” she says.

During this separation period, Bea got to work with other leading men such as Sam Milby and Derek Ramsay in the tearjerker And I Love You So, while John Lloyd starred in two equally successful movies with Sarah Geronimo—A Very Special Love and You Changed My Life--and went mano-a-mano with no less than Vilma Santos in In My Life.

The separation also helped improve Bea's working relationship with John Lloyd, especially when they worked together again in the recent Miss You Like Crazy, their follow-up project after I Love Betty La Fea on TV, and their reunion movie after One More Chance. “Natutunan naming mag-usap,which hindi namin nagagawa before pa. Natuto kaming mag-usap about our characters,” she says.

Obviously, it paid off, as Miss You Like Crazy was a certified blockbuster, earning P18 million on the first day and surpassing the P100 million mark just after a week.

But alas, Bea’s next project sees her John Lloyd-less again. She has started taping for a soap opposite Gretchen Barretto, tentatively titled Sisters.

“Sobrang nakakatuwa,” she says on working with La Greta. “When I heard that I’d be working with her, doon pa lang na-intimidate na ako, kasi alam naman natin na diyosa ang lola mo,’ no? When I met her, she said na napanood niya ‘yung mga movies ko, and she really likes Miss You Like Crazy. Nag-gain ako ng friend.”

Apart from the prime time soap, Bea will soon be working on a movie titled Sa’yo Lamang, which is to be directed by Laurice Guillen, and to also star Lorna Tolentino, Coco Martin, Enchong Dee, and Erich Gonzales.

Besides taking on a different character, she also looks forward to co-starring again with Lorna Tolentino, whom she first worked with in her breakout project, Kay Tagal Kang Hinintay. “Hindi naman ako matututong umarte kung hindi dahil sa kanya, dahil isa siya sa mga unang nag-train sa ‘kin. Despite all the fame and success na natamo niya, sobrang bait niyang tao nu’ng nakatrabaho ko siya,” she says. “I hope, I wish, that someday I could be like her.”

Aside from Sa’Yo Lamang, talks are circulating that Bea is set to team up with matinee idol Aga Muhlach. She says she would be over the moon if ever this project pushes through. The only time she had to work with Aga was when she guested in his defunct sitcom, That’s My Doc. As for the role, she says she just wants something out of the box. “I have no right project in mind. I just want to be surprised all the time,” she says.

Bea hopes for more projects, but most off all, “more learnings.”

To Each Her Own. “Beauty is in the eye of the beholder. I may find a person gorgeous, but others may think that she is not. As long as you know you have good intentions and you’re comfortable with yourself, and on your own skin, then you can be beautiful.”

Lipstick Jungle. “One makeup product that I cannot leave home without is lipstick, usually in pink or red, and Colour Collection’s Paradise Pink, kasi pwede mo din gawing blush-on ‘yun. If ever I would be stuck on an island and get to bring just one beauty product, I would bring a lipstick.”

Less Is More. “My advice for those who wear makeup is don’t overdo it. Don’t put too much. Baka in the morning naka-smoky eyes ka na. Go with your mood. If I’m feeling girly, I’m wearing pink. Dapat alam mo kung ano ang babagay sa ‘yo.”

Makeup 101. “My signature makeup look is the natural and fresh look. It helps also na mag-search ng makeup tutorials. Naaaliw ako doon. I learn a lot from them.”

No to Vanity. “My beauty regimen consists of sleeping well, eating the right food, and wearing the right makeup. Like my nails, I go to the salon twice a month. I don’t sleep with makeup on, and I moisturize. I’m not vain.Pero ‘yung mga maintenance na kailangang gawin, ginagawa ko.”

Walk the World and End Hunger 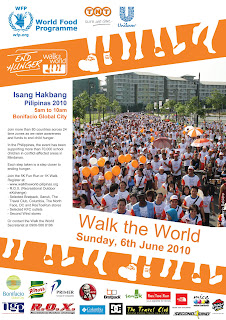 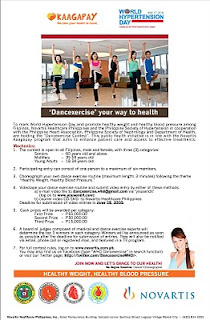 A dancexercise group can consist of one person to a maximum of six members. Participants must choreograph their own dance exercise routine (maximum length: 3 minutes) following the theme “Healthy Weight, Healthy Blood Pressure

Cash prizes will be awarded per category, as follows: