Elections. More Noisy in the Phillipines

It's driving me crazy!

It is election time once again, and even though its just a week's time, the non stop playing of jingles on some vehicle's megaphone is so loud. my head is about to explode.

Was there ever a time, when these people running for office, just gave speeches or even mounted election posters. Seriusly, who thought about the color coding scheme? That wearing orange, red, or blue (sometimes the floral design) would automatically mean that the voter is in favor of you. 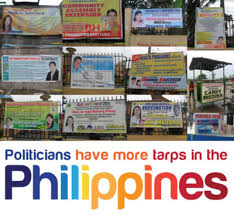 What about these non stop jingles. Aren't these baranggay officials supposed to maintain the peace and order in their vicinities, But, what do they do? They go ahead and recreate the national elections, gayahin ang mga idols who are in the higher office and suddenly composes a jingle about their names and disrupt, whatever little time I have for myself.

Honestly, baranggay officials should be confident enough to know their constituents and that they will vote for them by simply seeing their names in a ballot. If these people running for baranggay office are truly good neighbors, then there is no need to promote themselves as they can trust their co-barangays that they know that they have indeed contributed such to the community. That in itself will give them name recall.

My head will explode if one more "iboto!" jingle passes through my auditoty nerve! Oh no!, there it is, the impending  ,, whhhaaat!
Enjoy the tomato sauce!

On the job will film in Hollywood, will Gerald Anderson and Piolo Pascual get parts?

Universal Pictures has acquired the rights to the celebrated, yet box-office disappointment, On the Job.

The question here is will the new director/screenwriter/producer Baltasar Kolmakur give parts to the Filipino leads, say Gerald Anderson and Piolo Pascual; the way Iza Calzado scored a Hollywood deal when the Yam Lamares' film Sigaw was remade in the US (the Echo).

Hmm, we can only wait and see. after all, Kolmakur did say that he had been developing the stiry even before OTJ begun production Tsk! Tsk!

Universal Pictures has optioned the rights to crime thriller “On the Job,” withBaltasar Kormakur on board to write and direct and Scott Stuber on board to produce.
Kormakur will also produce for his RVK Studios while Stuber will produce through his Universal-based Bluegrass Films banner. XYZ Films partners Nate Bolotin, Nick Spicer and Aram Tertzakian will also produce.
While some inspiration for the concept came from Erik Matti’s Filipino movie “On The Job,” Kormakur actually had already begun developing a project based on the same events as “On The Job” with XYZ Films before the Filipino film began production.
The pic is based on the real-life scandal where prison inmates were temporarily released from prison to work as contract killers on behalf of politicians and high ranking military officials.
XYZ Films handled worldwide sales and the film is now in release through Well Go USA in North America. It premiered at Cannes this year in the Directors Fortnight.
The remake and Kormakur’s involvement were reported this summer, but at the time the film didn’t have a studio to call home.
Nick Nesbitt, who brought the project in to Bluegrass Films, will oversee the project. Kyle Franke will oversee on behalf of XYZ Films while Universal’s vice president of production Anikah McLaren will oversee on behalf of the studio.
Universal and Kormakur have already seen good returns with “Contraband” and “2 Guns” and teaming him up with one of the studio’s top producers could lead to even bigger results.
Kormakur has been busy developing several projects including the Working Title pic “Everest” starring Josh Brolin and Jake Gyllenhaal. Stuber has seen big results on the comedy end with “Ted” and “Identity Thief.”
His action thriller “Safe House,” which could have similarities to “On the Job,” also hit big making more than $200 million worldwide.
XYZ Films and CAA co-brokered the underlying rights deal with Universal on behalf of the producers of On The Job.
Kormakur is repped by WME and attorney Peter Nelson. Matti is represented by CAA and attorney Chris Spicer.
Posted by anae at 10/20/2013 02:47:00 PM No comments:

Email ThisBlogThis!Share to TwitterShare to FacebookShare to Pinterest
Labels: movie

Mark your calendars, October 5, Saturday, 3:30 p.m. as the Tomato Girl makes her prediction that UST will take home the UAAP Season 76 Men's Basketball Trophy. Here are reasons why UST should and will win: 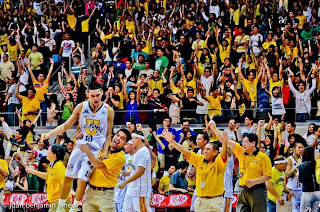 1. because UST has the heart for it. Can you hear the crowd going wild? People chanting the ever immortal cheer, "Go USTE! Go USTE!" Some sports writers say that the UAAP finals game has one theme: heart versus height. La Salle's boys may be taller, but UST's ballers has a rare never say die attitude. UST showed well enough aggressiveness and determination when they rewrote UAAP history and defeated the top seeded NU in the semifinals in a twice to beat battle.

Definitely, the cries are deafening, and that is what drives these Thomasian players to their core.

2. because Coach Pido cried for this. When Pido Jarencio says in between sobs, "Di ko talaga akalain na aabot pa kami [I really didn’t think that we would get this far]. Maraming taong nagdududa sa kakayanan ko [A lot of people doubted my ability].” Then, there must be something wrong, and that is why he needs to prove his detractors (am not one of them, thank you) wrong with this coveted trophy.


3. because UST earned it.Some say, like UP coach Rey Madrid that UST has the experience, giving them a clear shot for the title cup. With a disappointing runner up finish last year's run against Ateneo, UST proved that it has earned where it is today, and does not need to be a runner up. Kevin Ferrer worked out those three pointers, Abdul finally making those penalty shots, and the rest of the team just playing that darn hard.

4. because it's Jeric's Teng final year. Adding more oomph and inspiration to the never say die attitude is team captain is that this is team captain, Jeric Teng's final year. He made it clear that he wanted to go to the championship when he faced Bobby Ray Parks and the NU Bulldogs with the shirt that said, nope not today.

Of course, everybody wants a memorable exit. a championship finish, and not a runner-up (or as some say first loser). “We’re so close to the championship; we’re really going to fight for it,” the older Teng told Inquirer after winning against NU.

5. finally because God is a Thomasian. He made UST win against Ateneo, He can do it again, this time with the Espanya boys beating La Salle.

Although I was not part of this magazine when it had reached its pinnacle, I am still glad to have been part of MOD Mag.

I guess none of my colleagues, when they worked there was even part of MOD during its heyday. Well, none except our great editor-in-chief Cynthia U. Santiago.


The Angel Locsin Cover Story I worked on.

I remember every time I would attend a presscon, and I told people I was from MOD Mag, they will reply, "ay yung malaki,' and will make hand gestures to mimic the size. The MOD Mag that I worked for was the standard magazine size, 11x8. However sad but true, Mod that time was losing its direction.

I learned from a former colleague that this October 2013 issue will be MOD's last. The company, owned by National Bookstore, had decided to shut it down.