Review: Better at Weddings Than You by Mina V. Esguerra There's one quote that hit me "You don't do it because you don't need it, and you've never wanted it badly enough yet."

This was about relationships, and why the two main characters never had been in a long term relationship. Never been in a relationship myself, I can relate well to these two.

So this is book is a lot steamier than most (New Year, beach, etc), but still there is still that signature fuzzy feel that I only get whenever I read a MVE sex scene, ahaha! 💟

Okay, so I'm actually a fan of Mina's Chic Manila Series, so when Anton and Julie guest starred here, I was ecstatic. After all, their story (That Kind of Guy) was the last MVE book that I read (early this year). So, am hoping that the next Chic Manila book, we'll get to see Daphne and Aaron, and this just won't be a happy for now. 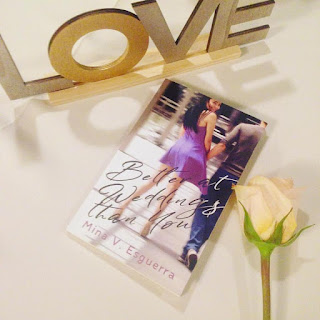 Daphne Cardenas is the best wedding planner around, and everyone knows it. That’s why her friend Greg hired her as an emergency replacement one month before his wedding—because he fears his fiancée Helen is falling for the guy they first hired for the job.

Aaron Trinidad is new to the wedding industry but years of conference planning and loads of charm make him good at it. Really good at it. Planning the wedding of his friend Helen should be easy, and it is. To be unceremoniously fired isn’t good for his new career, but the chance to learn from the best might be the silver lining.

Aaron and Daphne have chemistry, but there’s history with Helen that at least one other person considers a threat. Who’s the planner who can fix this impending disaster?