In Too Deep (Takedown, #1) Goodreads blurb:
A private island….an exclusive guest list…a hot, friendly guy who's more than willing to have that proverbial summer fling…it's the perfect getaway. Or is it?


Mary Shaw works hard and plays harder. Off a difficult project that doesn't go quite according to plan, she heads off on a solitary vacation to recharge her nerves and get things together. That there's a dimpled man-candy who wants to take things up a sexy notch? Perfect bonus. But all is not what it seems, and the things that Mary seeks to escape have a way of catching up with her. 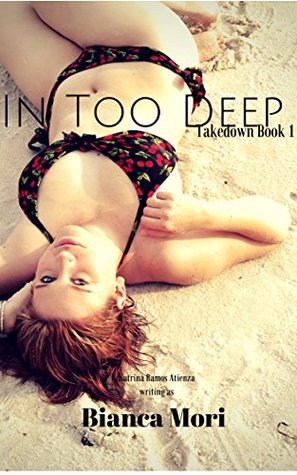 Review:
Mary is obviously a hot ginger  who's caught the eye of fellow vacationer Carson.

Part of a small group, Mary and Carson  couldn't help but have a little fun of their own. Especially when they have a quickie on a lagoon. Ooh-lalala! They both wanted it, after all, Mary did say it was just a beach hook-up.


But, after the intense sex, it makes you wonder, who is Mary?

Mary has got a good head, as when the storm did land on the island she took charge. Rationing power, food, and water. And as a way to save power, she gets to room with Carson. Score again!! When storm passes, Mary's mask must also be lifted but it isn't just hers. 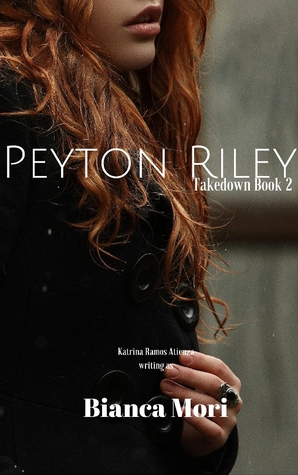 
Not to get Liam Neeson on your asses, but the fact is that Peyton Riley has a very specific skill set. She's good at her job and has just gotten off a major project when she crosses paths with the gorgeous snake-in-the-grass calling himself Carson Varis. He's taken her against her will, but to where, and to what end? She's got days to figure this out and escape–before her boss finds out where his favorite specialist has disappeared.

Carson Varis has got an eye for art and a mania for professionalism. No one does work-life balance like he does. But a certain fiery redhead has gotten his goals in a twist. He has his employer's order to fulfill, but can't get the memory of her body (and her hair, and her deep blue eyes, and oh, that mouth) out of the way. Can he get it together and pull off a job well done?

It's in the second book when we finally learn who Mary, or rather Peyton Riley, is and boom!

Yah! It's actually a big explosion not of the romantic kind but of the action kind, as this is where the thriller part kicks off.

"Randomly choosing to sleep with the first hot guy who'd drooled over her bikini was exactly why she was in this mess. Never again" - Bianca Mori,


Peyton specializes in takedowns, or to be more precise stop things from happening, be it a wedding or an acquisition deal. Peyton's last Barcelona job cost the life of a woman, who turns out to be the sister of Carson's employer. Now, the two of them must join forces to stop the sale of a fictitious art masterpiece. Peyton has the skill set, and Carson has the art know how. Peyton is the brains of the operations. Carson serves as the moral compass.

Reading Peyton Riley asserted what I have long suspected, that I'm actually a fade to black kind of girl. However, I still need the romantic build up that In Too Deep provided, especially if it's a romantic thriller such as this.

Sex wise things between Carson and Peyton are nil but that doesn't mean things aren't heating up. The chemistry between the two is undeniable. Take this chapter ender for example: 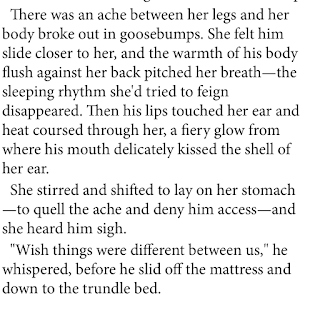 No, this scene did not have any sex in it, but the chemistry with the characters that Mori has carefully crafted were so human, that I wanted but how could that I start treating them as friends. vIf they were to meet at different circumstances, could they still have that same attraction, probably, but, but, but. Argh!

While reading the second book, I stumbled upon a quote in social media that books talk to you and this one does. I wanted to tell Peyton to swallow your damn pride woman, there's a perfectly good catch you have there and he's in love with you, but of course I couldn't blame Peyton.

If I was her real friend, I'd tell her to just go with what makes her happy, damn it, even if it goes against my conscience, (ehem, thank you Bianca for Carson).

The second book ended just like the first, with a cliff hanger. So before we go into the third book, there are a lot of questions going into my head.


Some of the questions that I hope will be answered by book three (which I am currently reading:
How did anja come into Roi's employment? What is the connection?
How did Roi know about Amsterdam and why cant he just save Peyton after all Peyton did say she could just call Roi? What made Roi so mad? Couldnt she just explain it to him?

JK Rowling's world building is enough to pull a fan and use his or her imagination to recreate Hogwarts, Harry Potter, and all the other elements of the wizarding world.


With that, even though the book says story by JK Rowling, and this is something I will continue on telling people, even though I don't believe it myself, I feel like the story just didn't come from Rowling. Maybe bits of it did. parts of it did, but the time turner and alternate reality thing just didn't come off to me as something that would exist in the same universe as the story of the Prisoner of Azkaban. and, and, and ---Ron, come on Ron Weasley! He felt like a stand in for the twins!

Still, like what I do with everything else that I read, I take it in as fact (even though it may be contradictory or even fallacious) and just get on with it.

Surprisingly, it made me laugh and there were moments that made me cry.

Based on an original new story by J.K. Rowling, Jack Thorne and John Tiffany, a new play by Jack Thorne, Harry Potter and the Cursed Child is the eighth story in the Harry Potter series and the first official Harry Potter story to be presented on stage. The play will receive its world premiere in London’s West End on July 30, 2016.

It was always difficult being Harry Potter and it isn’t much easier now that he is an overworked employee of the Ministry of Magic, a husband and father of three school-age children.

While Harry grapples with a past that refuses to stay where it belongs, his youngest son Albus must struggle with the weight of a family legacy he never wanted. As past and present fuse ominously, both father and son learn the uncomfortable truth: sometimes, darkness comes from unexpected places.
Posted by anae at 8/18/2016 12:26:00 PM No comments:

Win a signed copy of Takedown by Bianca Mori!

a Rafflecopter giveaway The giveaway is both open to PH and INT readers. 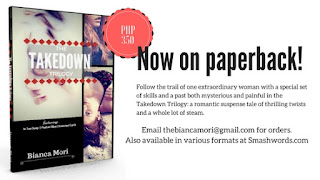