GUEST POST: The Story of Derrick and Nadia by Georgette Gonzales

(Not a spoiler, promise!)

In the Tagalog romance publishing world, authors go through this process: Write the 20k-plus-word long novella, submit it, then follow up for feedback several weeks later. If approved, we got paid, and wait for the story to get published after a few months. If the story didn’t get approved . . . Ahh, that’s a tragedy many indie authors would never get to experience (although the feeling may be the same when one gets negative reviews).

The year was 2009. I submitted a manuscript that was a story loosely based on my own experience (gah). That one was memorable not for the content and inspiration (yes, please believe me) but because of the process by which I wrote it. I wrote the ending scene for that one before I even began it. Not a normal thing I usually do but I just had so much faith in that scene. Loved it, even. Only to be told the story was being returned.


I made revisions to the story and the version that eventually got approved (and subsequently published) was one that no longer ended with that scene from the original manuscript. Said original MS ended in my trashed WIPs folder. I keep all the old rejected versions (yes, there’s a number of them) in the hopes that someday, I might be able to use them, and with improvements, be able to re-submit them.

When Kate Sebastian came up with the idea for a summer-themed anthology, I immediately thought that was it! That unpublished story, or at least that particular scene, was being given a second chance. All I needed was to write a short beginning and middle, make the story happen in summer (the original one happened during the rainy season), and I’d have a short story to contribute. 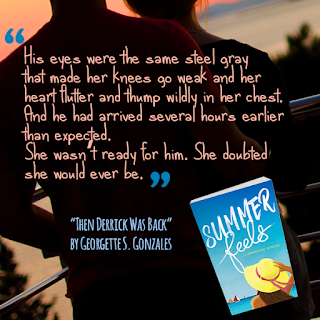 And that was how Then Derrick Was Back was born. A story about a second chance at love (which I never got in real life and which made the story all the more a work of fiction. Hah), and how truth and trust triumph over odds. Naks!

I can’t very well narrate here how the story ended… err… how it went. You, dear reader, will have to get a copy of #SummerFeels to find out. *wink*