ERICH GONZALES
No Complaints, No Implants
-Just Having Her Heart’s Desires

SUCCESS, Erich Gonzales believes, is something that you have to work for. She speaks from experience.

After winning the Star Circle Quest in 2005, Erich has played an array of characters on television--a meddling sister to a destined couple (Sana Maulit Muli), an older sister to a half blind kung fu kid (Kung Fu Kids), and an encouraging friend to a horse whisperer (Ligaw na Bulaklak). Her biggest break, however, came when she was cast as Nene, a fourteen-year-old girl who becomes pregnant in the prime time soap Katorse, a role originally portr 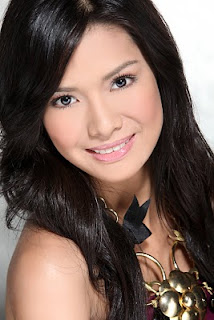 ABS-CBN took four years to give her what many would consider a breakthrough role. But Erich is not complaining. Rather, she feels blessed. She shares, “I’ve waited for four years for this break. I can say it’s worth the wait. I’m really blessed and thankful.” Blessed she is, with a growing fan base and soap leading the early evening slot in both nationwide and Metro Manila rating.

“Everything has its time talaga,” she says in her distinctive husky voice, adding that the project came when she was already settled and ready to accept mature roles.

This Cebu-born-Davao-bred lass admitted, though, that she was reluctant at first to accept the role of Nene as it would require her to do kissing and love scenes. Nonetheless, it was the story that got her to say yes. After all, Katorse hopes to inculcate values to its teenage viewers about teenage pregnancy. She adds, “It’s like a wake-up call for the teens na huwag silang magmadali, huwag silang pabigla-bigla, and to wait for the right time.” She trusts that her audience will learn from Nene’s mistakes, “kasi mayroon namang time para sa lahat ng bagay. Makinig sila sa magulang nila.”

Because of the nature of her role in Katorse, Erich has been labeled a sexy actress by some. Some have even hinted that she had had breast augmentation. But Erich stresses that the rumors are all a lie, even daring the one who started them to give proof. “It’s my personal choice not to,” says Erich on why she hasn’t gone under the knife. “There’s nothing wrong with that naman, pero I’m satisfied with what I have.”

Its intrigues like this that Erich has learned to shun, as she knows what is the truth and the people who matter to her believe her as well. What she chooses to focus on is honing her craft. Despite headlining her own teleserye, Erich is the first to admit that she still has a lot to prove in this industry. “Gusto kong maging versatile (actress). Gusto ko din to portray different roles, yung mga challenging roles, mga hindi ko pa nagagawa before. Sobrang love ko kasi ‘tong work na ‘to,” she says. She loves it so much she even took voice and dance lessons. But no, she makes it clear that she won’t be releasing an album any time soon.

Although she has no upcoming record, we would be seeing more of Erich. She has an entry to this year’s Metro Manila Film Festival, a movie with Katorse leading man Enchong Dee, and one more teleserye.

Looks like this is turning out to be a big year for Erich. The actress, however, takes it all in stride. She says, “Fame naman is something na hindi ka dapat malunod.”

THE PRETTY actress spills her shopping and culinary faves. Plus, her celeb crushes and what she would give her Katorse leading men this Christmas:

I love to shop at … People are People, because it has everything, like clothes, accessories, and shoes. Also, Topshop and Zara.
My shopping buddies are…Melissa (Ricks) and Kim (Chiu).
My everyday getup consists of… pants at magandang top lang. Pero usually, dress na lang para mas madali, para I don’t have to mix and match pa. Shoes na lang, and I’m good to go na.
For breakfast, I like having… puto, kakanin, and juice
My favorite food is… I have a sweet tooth kasi, that’s why I like chocolates and cake. My favorites are Hershey’s Kisses and malteseers
My favorite cake is… Cheesecake
My favorite ice cream flavor is… Nangkasuy. I like fruits on vanilla ice cream.
My celebrity crushes are… Piolo (Pascual). Standard answer na, everyone kasi may crush sa kanya. I also like the boys of Gossip Girl (Ed Westwick, Chace Crawford, Penn Badgley).
My ideal guy has… No qualifications. Pag nandoon na sa harapan ko mawawala na yun. I find it funny na kailangan tall or ano. Kasi once nan andiyan na, nandiyan na, eh. Pero siyempre gusto ko approved ng family ko.

Erich Gonzales is undoubtedly the Philippines sweetheart. Really really looking forward to her upcoming movie (Suddenly It's Magic) with Mario Maurer. Hope to see more of her movies in future.