Read: All's Fair in Blog and War by Chrissie Peria

Set to go on a blogtour on the land of egg tarts, Macau, Five was running late, and missed the elevator thanks to a boy who closed it on her. From that awkward (irritating) first meeting, you known right then and there that it was really Jesse who Five will end up with together.

(I'll try no to spoil anything, because I want you to read it for yourself.)

Five's irritation toward Jesse was so cute that I didn't even notice that I was smiling because of all the feels coming from the pages. #kiligpamore! It was Jesse and all his gentlemanly ways (being a hand to hold onto in that rough patch, willingness to help, encouraging words) that made us,made me like him even more for Five. It was also this that made Five fall in love with him.

The main dilemma is pride. A little bit of pride, pride that drives us not to think logically and not to ask the other party concerned on what happened drove this two apart. However, life has a way in straightening out this misunderstanding, and you guessed it an egg tart or in this case an egg pie delivered by a cutie saves the day.

In the end there's a little caveat  it was a reminder from Five that happy endings only happen in books and movies. But, that doesn't mean we can learn how make to our own stories.

Extra: an epilogue of sorts how one guy's ka torpehan can be upturned thanks to the patience of a gal. 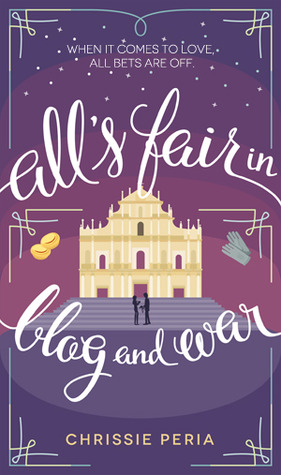 Five Cuevas @fivetravels
Three guesses to where I'm going next. Starts with an M. Ends with a U. Has a lechon named after it. #travel

Twenty-something travel blogger Five thinks she has hit the jackpot when she gets invited to glittering Macau for an all-expense-paid bloggers tour. Think majestic old churches, sparkling casinos, exhilarating bungee jumps, and the world's most unforgettable egg tarts. The trip is practically perfect, except for one little glitch. She gets assigned to be travel buddies with Jesse, the world's most infuriating photo blogger, and it's definitely war at first sight.

Will Five let Jesse turn her dream vacation into a total nightmare? Or will falling in love be on the itinerary?