Review: Underneath it All by Ysa Arcangel

"Breaking the rules have never felt so right..."

The tagline summarizes the love story between a college student and her dean.

Well, because it is and Agata(called Gats by her friends) knows it. But that doesn't stop her to join a sorority because she heard that Reeves (the young hot dean) likes, sorority girls.

Thankfully enough, before she can pledge herself, Reeve came to her rescue in the middle of a storm, swooped her off her feet, and voila! Fireworks!

Agata loves her family so much, that was why Reeve had the opportunity to meet them before they were, um, official. The dilemma? Reeve's sister is actually dating Mik, Gat's twin brother.

Reeve on the other hand has so much family drama going on, that most of the plot problems were (and even had Reeve) focused on that. He wants to seek revenge at his pops, just when the latter appointed him as dean. That leads to him shutting down the school. As expected, Agata's friends and co-students rally to have his decision upturned.

Caleb, a photog is pining after Gats, and even got her to move to LA. So, what will happen to Reeve

A little caveat, for you to really enjoy this book, you have to take in everything as fact. Some of that may include Reeve's side of the story, like that of his stepmother and of Red (is he really his half-brother? Cause, he is older than Rogue, who is only a teenager, yet his pining for a girl who is after Reeve).

I couldn't for the love of me, take in Agata's question to Reeve's father when the latter told her that his stepmother was found dead with his baby. I mean, when you are relayed that kind of information, what is the first thing that comes to your mind.

Just like any other series, I have to say I liked the first one better. Probably why, I get squishy inside every time Ivo and Brandy has a scene together. Plus, I think Brandy is getting better. Who-hoo!

I received this book as an ARC for a honest review. Receiving this for free doesn't affect my review. 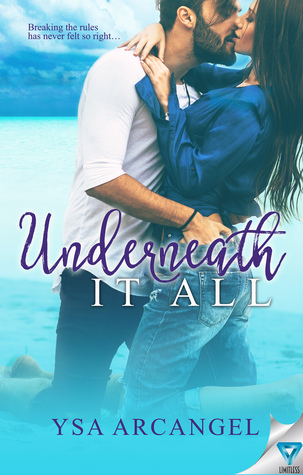 A senior at Gates University, Agata Ferrero knows without a doubt that Reeve Gates is off limits…Students can’t date faculty, and Reeve has been appointed by his father as the new Dean of the College of Arts and Sciences. But when a near accident with the front end of Reeve’s sleek sports car brings her in close contact with him, Agata can’t deny the flash of desire that consumes her.
Posted by anae at 6/23/2016 08:47:00 PM