by Gillian Flynn
My rating: 5 of 5 stars 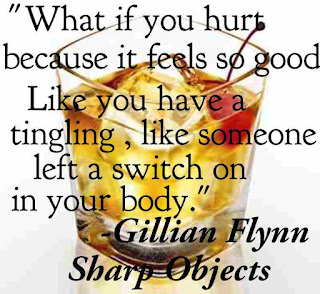 Gillian Flynn slowly weaves out the story of Camille Preaker. First giving hints of her alcoholism, then her cutting streak, and most importantly what was it about her (numb and stiff neck) mother that made her who she is.

Camille comes back to Wind Gap, Missouri against her better judgement to cover a possible serial killer who kills young girls and takes out their teeth. As the story progresses, Natalie, the second victim is found, confirming her editor's hunch and making Camille stay with Wind Gapians (that's what they prefer to be called). But, it isn't only the police or her friends that Camille gets to interact with, there is also her mother Adora, never present step-father Allan, her crazy, attention-craving step-sister Amma (whose named bothered me because that's my mama's name on my phone), and the ghost of her sister Marian.

Who killed Natalie and Ann? Hmm, read the book, promise you won't regret it.

My first guess was really the mother. How can she be so cold to her own daughter? She does not even address or communicate with Camille? She was, she was, as it turns out an attention seeker and she took it out on her daughters. This was confirmed later by what Camille found on Marian's files.
Amma, I ruled her out because of her age. I mean a 13 year-old killer. But hey there have been younger killers (I checked), plus the girl had accomplices. This really is a good case of the nature vs nurture. Adora was making her sick, and then she suddenly pours her attention to other girls who reminded her of Camille. Adora made her into this killer, sorry, but I just had to call it. Thankfully, she needed the approval of Camille later on, which am sure the girl and her family from Chicago was not that thankful for.

WICKED above her hipbone, GIRL across her heart
Words are like a road map to reporter Camille Preaker’s troubled past. Fresh from a brief stay at a psych hospital, Camille’s first assignment from the second-rate daily paper where she works brings her reluctantly back to her hometown to cover the murders of two preteen girls.

NASTY on her kneecap, BABYDOLL on her leg
Since she left town eight years ago, Camille has hardly spoken to her neurotic, hypochondriac mother or to the half-sister she barely knows: a beautiful thirteen-year-old with an eerie grip on the town. Now, installed again in her family’s Victorian mansion, Camille is haunted by the childhood tragedy she has spent her whole life trying to cut from her memory.

HARMFUL on her wrist, WHORE on her ankle
As Camille works to uncover the truth about these violent crimes, she finds herself identifying with the young victims—a bit too strongly. Clues keep leading to dead ends, forcing Camille to unravel the psychological puzzle of her own past to get at the story. Dogged by her own demons, Camille will have to confront what happened to her years before if she wants to survive this homecoming.