What would you do when a crime happens before you? When Japanese expat Keniichi Daimon witnessed a kidnapping, he failed to answer that question.

His moment of indecision would later cost a little girl her life, and endanger what he dearly holds the most. With innocent blood now in his hands, Keniichi will aim to atone by seeking out the perpetrator, but his quest will expose a greater evil hiding in Manila's lights and shadows, a force as terrible as the crime and corruption seeping into society itself.

Thus begins a story of vengeance, love, unbreakable will, and justice. 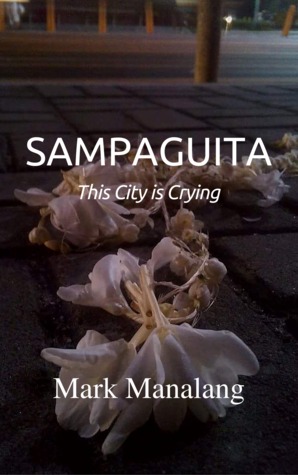 Keniichi's love Manila is transparent as he takes walks by his lonesome in the red light district of Manila. But not to ogle at the girls mind you, but to relish (I hope, as I feel the same way) the old glory. Surely, he's not the prime target in a place full of whites, and nobody will automatically peg him as a CEO of a multimillion company. Maybe for some, he is just some random Tsinoy, but what Manila is and Keniichi's crime-conscious ways is an odd if not affable mix.

Strong female characters in the novella Sampaguita are not lacking. Maya is in control of Keniichi even of the office that she manages to run things on the day that her boyfriend cannot function, Jasmine stood as the parent for her younger sister providing for her in both physical and emotional support.

These women's weakness, however, seems to be in the sexual aspect. They both cannot seem to say no, or rather they cannot manipulate the opposite sex when it comes to physical desires, the way that they can manipulate fate in everything else.

Maya, even just a humble secretary, rose to power and can control a company but cannot ward off the hungry predators who are the Keniichi's business partners. Jasmine, who grew up in the streets and knew what GRO meant, cannot fight off her urges towards an expat even in the most crucial times.

I have to say, that I was affected with Maya's passing, but call it as a McGuffin, as if the lovely Filipina had not died, would Keniichi have acted out the way that he did?